CUPE 3903: We’re Winning, and Now Is the Time for Solidarity with International Students

York University is finally back at the bargaining table and addressing some of CUPE 3903’s core demands. Everyone knows the writing is on the wall for York, as rumors swirl of intense pressure for the administration to settle before April 6. However, York appears to still be holding back on some key issues, especially regarding international students.

I spoke at the general membership meeting the other night, where I argued that York administrators have now accepted that they are going to have to meet CUPE’s core demands in order to end this strike. What seems clear, however, is that they are attempting to lose in such a manner that do the most damage to the solidarity politics of our union, which is home to three different units (one for graduate student TAs and course directors, another for contract faculty, and a third for graduate assistants and research assistants). Each of these units has different interests, and the administrators already succeeded earlier in the strike in driving a wedge between the interests of Unit 2 and the rest of the union.

Lately, they have been trying to stress even more divisions throughout our ranks. Initially they offered movement on the issue of tuition indexation, which is geared to appeal to Unit 1, but continued to outright ignore the minimal demands of Unit 3. In addition, they appear to be hoping that the much larger population of domestic students will accept a deal that will leave in place an outrageous $7000 hike in tuition this year. The tactic is clear: divide all three units and isolate international students.

However, an offer that meets most of our demands, but still leaves in place the $7000 hike in international tuition this year, is simply not a win. This would be a major concession, as, In essence, we would be agreeing to a $7000 pay cut for a portion of our membership. 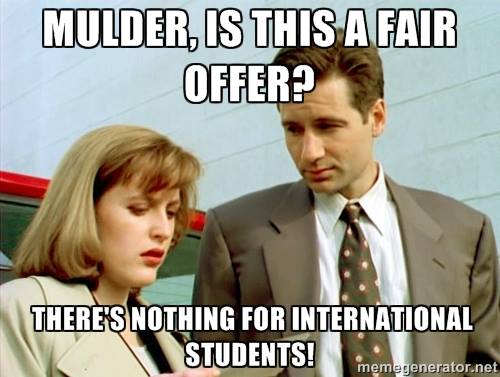 York seemed to suggest today that tomorrow there will be a legitimate offer tabled regarding Unit 3 minimum funding and addressing some of the lingering issues around indexation. I’ve heard, however, they don’t seem to be budging around the international student tuition hike. I think this should be of grave concern to all members of Units 1 & 3, but this is an especially crucial issue for Unit 3. Unit 3 international masters students in particular are the ones who face the awful double whammy of extremely high international tuition rates as well as the lowest levels of funding (usually less than $10,000 per year, while tuition is now $20,000). Unit 1 & 3 international PhDs are in slightly less worse shape, making barely above the new tuition rates of $20k/year, but still don’t come close to earning enough to pay rent or eat.

For international students, both the issues of indexation and a minimum funding guarantee for Unit 3 are crucial to helping make York graduate school a more affordable, accessible, and livable experience for international grad students in our unit. I currently experience first hand the struggles of trying to pay international tuition at the 2013 admission rate of $13,000 per year, when my GA funding is for $9600. I’m only able to make it work with a large funding support of an Ontario Graduate Scholarship (OGS) and a second job. But as there are only seven OGS grants available for ALL of the international grad students, masters and PhD combined, and we are not eligible for most other grants such SSHRC, the current high tuition rates are simply untenable for most of our international members who are not wealthy, which many of us are not.

I also want to signal boost the thoughts of the CUPE BIPOC caucus, who just released an important open letter that highlights the stakes of numerous union issues and practices on some of our most precarious and marginalized members. In particular, with regards to tuition indexation, they write:

“We see the demands for tuition indexation and minimum guarantee for Unit 3 as central to concerns about race and equitable access to education. While York prides itself on the ‘diversity’ of our undergraduate students, a majority of whom are increasingly racialized, gendered, disabled, queer, and trans, this diversity is much less evident in the graduate classrooms. Tuition indexation and minimum guarantees are essential for graduate education to be possible and accessible for these very students from marginalized communities. Further, we must remember that tuition indexation is part of the broader struggles for free and accessible public education which students are fighting for within Canada and globally.

The BIPOC statement addresses many important aspects of accessibility that are implicit in our fight for indexation. Building on this, let me give another example: when people who are not already wealthy and privileged see that international tuition rates at York are $20,000 per year, they may be deterred from even considering applying before knowing if they can access funding to enroll if they are accepted. This ultimately hurts all graduate students, as well as the university community as a whole.

The entire point of equity frameworks is that the recognition that when only the the interests of the “majority” (in this case, domestic graduate students) are considered, those who are marginalized within the group often see their needs ignored or only minimally addressed.

In this sense, I think it is appropriate, now more than ever, for all of us as CUPE 3903 members to center international student concerns as we enter the final stages of striking to win. International students are the people most financially implicated and marginalized with regards to the issues of indexation and minimum funding guarantees. If we as a union can stand, as we have, for LGBTQ equity issues, we can stand for international students as well. Indeed, some of us are both. What meaning, in this context, does LGBTQ equity have when poor, queer, female, disabled, people of color can’t afford to come to York and thus hope to be “hired” in the first place? Pushing for LGBTQ equity/equality, without grounding it in the material conditions that harm poor queers and queer people of color, turns LGBTQ equity into a tool accessible only to those LGBTQ folks who are already the most privileged. This is why it is important that we win ALL THREE of our core demands simultaneously, as winning any one or two with out the others evacuates much of the impact they are intended to have.

In this context, it’s important to continue to examine why the university is so invested in maintaining this tuition hike, and we should be extremely wary of accepting backdoor responses or promises from the York administration to get us to accept the tuition hike for international students (such as the vague promises of bursaries or need based funding).

We know the clock is ticking for the employer. Thus, this is precisely the time, even if the administration meets most of our other demands, to stand firm in our support of our international student colleagues. We need to not only win this strike, we need to win in such a way that our practices of solidarity remain intact, ensuring that we don’t isolate or leave out any units, or allow this administration to pit domestic students against international students.

We are stronger when we fight as a whole, and we can and will win ALL of our core demands, for everyone, if we stick together.

Strikes Are Not Disasters: On “States of Emergency” and Democratic Processes within University and Union Administrations

As a graduate student and member of CUPE 3903 at York University, I am currently on strike. Our fellow grad...