Strikes Are Not Disasters: On “States of Emergency” and Democratic Processes within University and Union Administrations

As a graduate student and member of CUPE 3903 at York University, I am currently on strike. Our fellow grad students at the University of Toronto, members of CUPE 3902, are also on strike. And as both unions go into our fourth week of withholding our labor, I’m starting to hear one word repeated more and more frequently: “emergency.”

This language is quite troubling and problematic.

First, calling strikes “emergencies” implies that strikes are somehow unforeseeable, unmanageable events. This couldn’t be further from the truth. Strikes are actually heavily regulated by law. They only occur after months and months of failed bargaining and mediation. And even then, they only begin after a lengthy process that involves week-long strike votes and more failed rounds of bargaining. Strikes hardly come out of nowhere or with little more than a few days warning like, say, a snowstorm or hurricane. 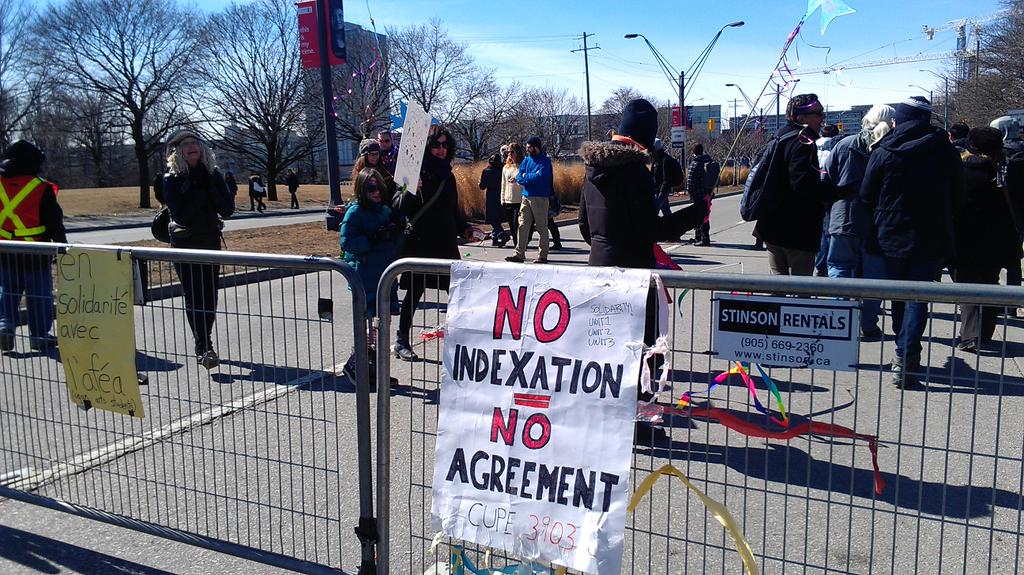 Second, they are utterly preventable. Especially in the university setting, where the mandate of administrators should be to provide a high quality education free from the profit motivated structures and labor tactics of corporations, it is shameful and embarrassing that administrators are so focused on spending as little as possible to pay the highly qualified and highly educated contract faculty and graduate students who do the bulk of university teaching. What is the profit motive here? Where are all the state funding and tuition dollars going? (I’m asking rhetorically. We know where: administrator salaries (they are getting paid more and more like corporate officers and CEOs), PR campaigns, and capital expenditures like a new stadium for the Pan Am Games at York.)

Thus, despite what should be a lack of profit motive to oppress and exploit their most precarious workers, administrators choose to prioritize lining their own pockets and spending millions on facilities and projects that are not central to what should be the core mission(s) of all universities. This is a choice, not an uncontrollable disaster. The strikes at York and U of T could be resolved for very small amounts of money in the grand scheme of billion dollar plus university budgets. But instead of making fair and reasonable offers, these administrators intentionally provoked extended strikes when they could have prevented them to begin with. And then, now that the strikes have commenced, the administrators pretend like they have no power to resolve them when they could end them immediately for relatively little cost.

So why are all of these people suddenly screaming “emergency?”

For the same reasons that the governments of the US, Canada, and other nations invoke the abstract concept of “terrorism” to declare “states of emergency:” in order to bypass, override, and/or permanently do away with any vestiges of democratic processes that may still remain within these institutions. It is no coincidence that university administrators are trying to re-brand a strike as a “state of emergency” at the same time as the Harper government is trying pass Bill C-51, a sweeping, so-called “anti-terrorisim” bill that would potentially criminalize most forms of public protest and justify intrusive spying on any and all ordinary people. In addition, these “emergency powers” are used, like those marshaled by universities and union leadership, to disproportionally target and disenfranchise people of color especially, as well as others who are marginalized on the bases of class, gender, sexuality, ability, and more.

University administrators have long been attacking the principle of “academic freedom” as they endlessly shift tenure-lines to much more vulnerable contract faculty and graduate students. It only makes it that much more disgusting that they then turn around and use the fact that they fail to pay these adjunct faculty living wages (and more) — thus causing them to organize and strike for better treatment — as an excuse to further erode or destroy principles of academic freedom.

Unfortunately, it is not just fatcat administrators and co-opted senior faculty that are touting these “emergency” calls.

Even more inexplicably, our own local and national CUPE leadership, which should understand a strike as one of the functions of and recourses available to their organizations to secure the best contract possible for members, continue to throw around the word “emergency” as an excuse to ignore democratic processes that should foster member participation. For example, these union “leaders” refuse to follow our own bylaws or respect motions passed at general membership meetings, claiming that the decisions of a handful of members are more democratic than ones made at publicly announced meetings in which hundreds of members participate. Why our own union is continually engaging in strike breaking tactics as bad or worse as those of the university is incomprehensible to me. But my point is this:

Strikes are not emergencies, nor are they disasters. They are foreseeable, and, given the only ever increasing precarity of adjunct faculty, as well as the central role of university administrators and faculty in creating these precarious labor conditions, strikes should actually be expected regularly unless university administrators immediately take steps to adjust their unsustainable and destructive labor and management practices.

In any case, a strike is a process that is, at base, the democratic expression of workers’ political and economic rights to have a say in their (collective) working conditions. And it’s high time that all the institutions involved started respecting these, and future strikes, as such.

Thanks for this; another really important update and analysis which helps me feel a bit closer to the strike despite geographic distance. I’ve been reading and working with M. Jacqui Alexander’s book *Pedagogies of Crossing* again lately. She does a really fantastic analysis of a movement from the mid- and late-90s at the New School in which, among many other strategies, Faculty of Color re-appropriated the “state of emergency” language typically deployed as you state here.

I’ll share a paragraph here in case you find it useful:

“At dawn on Tuesday, 17 December 1996, members of END [Education not Domination] along with other student groups put the finishing touches on placards and posters: ‘If you are sick of the New School’s hollow commitment to diversity, MOBILIZE.’ They drew maps outlining the geographies of power, which they then turned into points of protest. AS WBAI [a local radio station] aired public service announcements, faculty of color as well as part-time and visiting faculty were making final preparations for their report. Letters of support poured in from poets and writers, public intellectuals, and people of conscience in the academy, as well as from organization such as the Latino Workers Organization and the National Labor Committee, urging the school to respect and honor the rights of workers; to take advantage of the opportunity for self-critique and transformation; and to be accountable to different publics who believed in the School’s progressive legacy. By evening, the Wolff Conference Room of the [Graduate Faculty] was packed. Faculty of color reported on the state of emergency at the School, while students read letters of solidarity that described similar conditions at other universities––thus linking the Mobilization to similar struggles elsewhere. We were being situated within a larger critical community––carrying part of the ‘force of history with us,’ as James Baldwin put it––thereby creating the sense that we had not arrived at the School by ourselves, but that we were indeed living the different ‘histories that walked and lived with us.’ All the means at our disposal, both internal and external, were brought to bear on that day of declaration, a moment of confrontation and profound hope. The struggle that day arose from the conviction that dignity is rooted in self-accountability. Knowing that we could celebrate our collective will to dissent––a move from silence to voice in the face of rejection. And self-accountability also meant that we were obliged to keep counsel with our inner selves, to come to the point of speaking the unspeakable” (152–3).

Anyway, it’s a chapter I come back to over and over again; hard to piece out, even in long quotes. The context is different, but I’ve drawn a lot of support, imagination, and healing from it and thought it would be worth it to share.

Ooooh great quote! It’s been a long time since I’ve looked at that text.

Yeah, it would be nice if we could do such a re-appropration here, or some other move that would center the perspectives of people of color…

The power of words, eh! Words could mean what one wants them to mean. Was it Lewis Carroll who said that? What would happen if ALL faculty and students decided to boycott classes? It’s the power of the pyramid. The base keeps everything in place, but the apex has the power. Too bad.

On Rhetorics of Safety and Security on the CUPE 3903 Lines

I see a lot of calls for safety on the picket lines. In particular, folks are now heavily calling on...