York administrators no doubt thought they delivered a decisive blow to CUPE when their ploy to split the union, which was inexplicably but eagerly facilitated by a small but persistent faction of 3903’s bargaining team and exec, resulted in unit 2 voting to end their strike.

However, the broader CUPE membership of units 1 & 3 (and quite a few folks from unit 2) have risen to the occasion and are determined not to let either York administrators, or those few of our leaders who seem so eager to concede to and collaborate with the administration, sway our resolve. We have voted decisively, twice now, to stay out on strike until our three core demands are met:

Let me address these issues one at a time.

1) Tuition indexation. This is one of the core strike issues because, unlike many universities elsewhere (including my previous institution, the University of California, where grad students pay no tuition when they teach or work for the university), York still requires it’s graduate student employees to pay large sums of money to tuition out of their pockets and/or pay. This is unusual even amongst other staff at York: one of the benefits for most York employees is free tuition if they decide to take classes!

There is a lot of confusion about what CUPE is asking for when we say “indexation.” That is because we aren’t even asking that grad students not have to pay tuition while working for York (though I think this would be quite reasonable). Instead, we are asking that tuition levels stay where they were prior to this academic year (prior to when York increased tuition by $7000 per year for incoming graduate students for 2014-15), effectively and unilaterally re-interpreting the 15 year-old indexation clause in CUPE contracts that has prevented them from raising tuition without a corresponding raise in funding. It is because of this huge and egregious hike in international fees that we are standing firm on requiring that York agree to new contractual language on indexation.

This is important because, since we already pay so much in tuition ($6000 per year for domestic students, $13,000, or now $20,000, for international students), if such provisions are not in place, York would be able to decrease our take home pay any time it wanted to simply by raising tuition (as it has shown it wants to do this year). It is also thus important to note that when York starts talking about the high hourly wages it pays us, they of course are not subtracting the tuition that comes directly out of that paycheck in order for us to stay enrolled (and thus keep our jobs). Quite the “company store” type scam, isn’t it?

2) Minimum funding guarantees of $15,000 for unit 3 members. Currently Unit 3 members earn $9600 before paying tuition. This means, in actuality, that Unit 3 domestic students take home $3600 after paying $6000 in fees, while international students still owe York either $3400 for tuition (for those of us who enrolled prior to 2014) or around $10,000 (for new international students). I can tell you all this for a fact: I am an international student in Unit 3, and this is my pay right now. I work a second job 10 hours/week, the maximum I’m allowed under Canadian immigration law (everyone on a student visa is limited to working 20 hours/week) on top of my classes and finishing my thesis, in order to be able to pay my rent and eat.

Yes, that’s right. York expects us to pay huge sums of money for the privilege of working for them, and it wants to have the ability to raise the amount of tuition when the “freeze” of these levels it has offered has expired in the future, potentially decreasing all Unit 3 (and Unit 1) take-home pay dramatically. This is why tuition indexation, combined with a reasonable minimum funding guarantee of $15,000 per year for Unit 3 members, are both core demands. One means nothing without the other.

3) LGBTQ equity. The establishment of LGBTQ as an equity category would mean, among other things, that York simply begins to keep track of how many employees identify as LGBTQ. This one is a tricky issue. Ideally, this would lead in the future to helping to ensure, alongside other intersectional analyses of deficiencies in hiring practices for instructors, that jobs aren’t only going to those with the most privilege and access. It is important when considering this language, however, in my opinion as a white queer person, that the creation of this category never be used as a way to have white LGBTQ folks gain access to equity positions at the expense of other groups, especially racial and ethnic minorities.

That’s it. Those are our “huge” core demands that York thinks are so unreasonable to meet.

Yesterday CUPE 3903 members had heard that York made gestures to resume bargaining. Our union said it was available to meet this morning (March 13). However, instead it seems that today York was more interested in it’s PR image than actually making an effort to resolve the strike by meeting CUPE’s ridiculously reasonable demands.

York’s PR team came out with an infographic trying to spin it’s offer to the union, an offer which has been soundly rejected in membership wide votes at two meetings so far this month (March 2 and March 9). Instead of returning to the bargaining table with an offer that actually addresses our core demands, York is still refusing to bargain fairly (indeed, at all), instead taking their infographic to social media, attempting to start the hashtag #fairoffer.

Grad students and undergrads alike howled at York’s inept attempt to spin their already rejected offers. I’ll leave a few of the best memes here for your enjoyment: 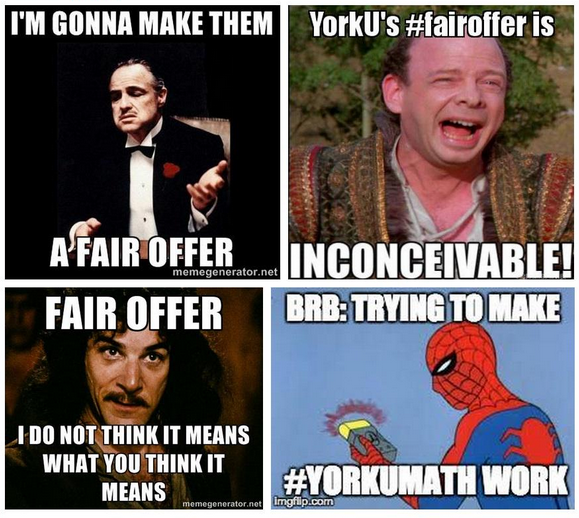 As our colleagues on strike with CUPE 3902 at the university of Toronto have noted with their own employer attempts to spin their bad offer, York is presenting misleading (if not outright erroneous) facts to the public in a campaign to make our rejection (twice) of their offer look unreasonable.

But it is York who is doing its best to be unreasonable. In fact, some of it’s latest moves – in addition to refusing to bargain in good faith while our bargaining team waits for York to join them at the table – are downright unscrupulous, if not illegal.

Here is a partial list of things the university is trying to do to end the strike rather than bargain fairly and make an offer that meets CUPE’s very modest demands:

As I have outlined above, it would be quite simple for York to end this strike. All they have to do is say, “yeah, you’re right, your really high fees of $6k/$13k per year are enough, so we’ll give you indexation. And yes, we shouldn’t discriminate against LGBTQ folks or have employees earning less than $15k per year before paying those high tuition fees.”

We aren’t asking for much. So please, York community, and the Senate in particular: support us. Pressure the fatcat administrators, many of whom are earning more than $300k per year to sit around and figure out ways not to bargain with us, to offer a fair deal that meets these very small demands.

How can you support us?

These are the two key things right now. Thank you to everyone for all the amazing support you have shown so far, and please don’t give up on us!

There’s a type in paragraph 1) under tuition indexation. It should read “its students” instead of “it’s students.” The apostrophe is the problem.

Yesterday, out of concern over what I heard about the proposed "tentative deal" reached with York University on Friday, I...